Not For The Squeamish, Snarl Review

After My last review of The Chair I chatted it up a little with Alterna Comics president and writer of The Chair Peter Simeti who was kind enough to give up the keys to the Alterna kingdom. I give social media full credit for my meeting Peter Simeti and giving me this opportunity to review some amazing works from Alterna.  Because of this I have decided to take advantage and do this review of Snarl. I have followed and friended Kelly Bender because of his creativity and because were both concerned with networking, so because of our social media friendship I felt I should maybe let it be known before the review. I whole heartedly admit to picking this book to review because of these two guys but I will never let my friendship cloud my reviewing, it would be unprofessional at best and as a blogger I can’t afford any shots to my credibility, so rest assure my review is exactly like the rest. 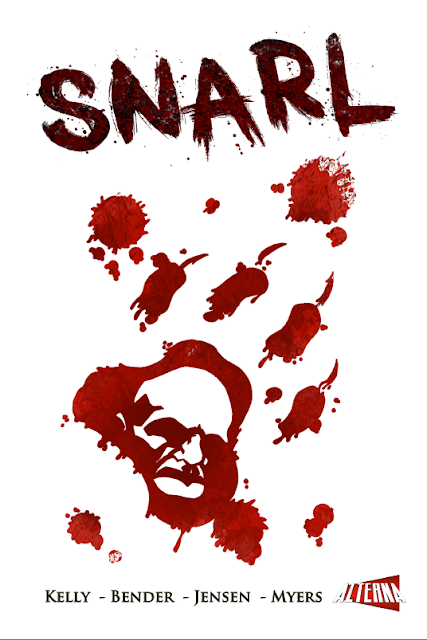 Snarl is written by Kelly Bender, art by Nathan Kelly, colors by Josh Jensen, letters by Micah Meyers, and is published by Alterna.  Snarl is a one shot and is an all-around good book as far as the art and lettering is concerned. The art is something between cartoon and realistic but carries what I assume is Nathan Kelly’s signature style mixed with some pretty awesome coloring by Josh Jensen. The coloring really assists this books feel because there are a lot of shadowy parts that depend on good coloring. I like the lettering by Micah Meyers as well because he followed the tone of the book with some of the letters that describe scenes and all of the thought bubbles and scene descriptions are perfect. I feel like these guys weren't just reading from the same book they were on the same page the entire time as well.

For me personally, the first thing that sticks out about the book is the location it’s set in, Seattle. I live in the Pacific Northwest and Seattle is pretty much the pinnacle of the Northwest culture and scene, so it instantly grabbed me. The beginning is a one page five panel intro that sets up the feeling of a man that survived something pretty hardcore. Bender sets up the coming flashback, which is the majority of the story, and makes the feelings of the man very clear. The first page is a nice set up because it shows us that the main guy is still alive but he clearly lived through something scary and lives with the scars daily.

As I said the majority of the story is a flashback and it starts right away with the main character, Detective Bevil, as he gets to the station. As the flashback starts it sets up the world that Detective Bevil lives in, a typical high pressure police station with a BA Captain that doesn't take no for an answer. Detective Bevil has a partner and an important case that is starting to weigh itself down on his back. We knew already that this case was what set up the intro but now that the story continue we see the small facts and details that start to set the world Bevil lives in. I feel like the setup with the Captain and the intro to the partner, Detective Sagun, is essential but what makes this part a good piece of writing is the way Bender blends the everyday actions to exposition. This is a sign of good writing and the way it blends the possible supernatural connection into the story is subtle but effective. The banter back and forth between all the police officers involved is done great and now we know that their facing a possible ware wolf.

Bevil and Sagun have been all around and have nearly exhausted their resources when a fellow Native American Officer gives Bevil an idea. Bevil drops Sagun off to try and get some info from a surviving victim at the local hospital while he heads to learn more about the possible native connections to the case. So far the story has flown so well I haven’t even noticed that I’m like ten plus pages into it. It’s not just the story, the art is great too, and one of the best pages so far is when Sagun is in the hospital trying to get the victim to wake from a coma. The shadows and the way that Kelly and Jensen contrast the obvious frustration with the way the page lays out is exactly what I think of when I think of good creators working well together. 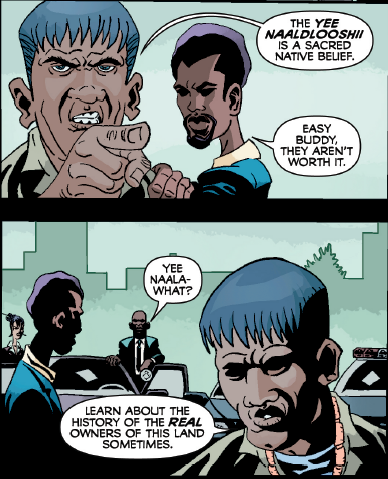 There is a small break in the A story that comes from a small one page conversation between the two guys from the beginning including the captain. They made it known to Bevil and Sagun that they needed to start making some headway but they speak a little bit on why during this little break. It’s followed by more murders of people in the park that help to break up the A story line. I wouldn't call the break a B story at all but it does serve a purpose and pushes the main story further along while emphasizing a few things; the severity of the case and the fact that Bevil is the best detective in the precinct, and the severity of the crimes. The two men make no bones about their desire to keep the feds and the media away from the story and the killings are clearly done by a shadowy wolf like creature. These two facts make the provide a break from the detectives but still service the story and that is very hard to do effectively but this team nails it on the head. The shadowy wolf thing could easily be the ware wolf the skeptical detectives were talking about but they leave the mystery to the reader’s imagination and I respect that.

The creative team starts to blend the detective’s story back in with the murder of the kids in the national park but they do it very subtly. Through dialog between Bevil and Sagun the direction of the investigation is revealed to be heading towards the local native tribe and their customs while the new murders keep showing the severity of the case and build up the mystery of who is doing it. Through some really gory and well-illustrated pages the culprits of the murders appear to be just regular wolves but the dialog indicates that Bevil believes it to be a man in a wolf suit or something of that nature. The dialog is eye opening and super well written, it delivers on suspense, foreshadowing, and exposition, everything a reader can ask for.

For the next few pages the detective team follows a lead that puts them at the door step of a man running an illegal sanctuary. The man once housed some rare wolves from a specific German bloodline and Bevil had a hunch he would find some answers at the sanctuary. Although the hunch didn't really result in any answers the encounter with the sanctuary owner proved that there are in fact wolves missing and possibly out killing people but Bevil still believes that the real culprit is over six feet tall and possibly a Native American that is following the Yee Naaldlooshii tradition that roughly translates to “with it, he goes on all fours.” At this point the writing is really winning me over because it flows like a crime noir novel and is intertwining everything together really well. I feel like I’m a detective right next to Bevil and Sagun putting it all together piece by piece.

Bevil and Sagun head to the Duwamish tribal reservation to meet with Detective Walker the man that put Bevil on the right path to begin with. Walker brings them into a bar to talk with a village elder and shaman that not only clues them in on what is going on he drops a major bomb shell and tells them he can locate and knows the culprit. As I stated before I’m from the Seattle area and Seattle is actually sitting on occupied Duwamish territory so this story and the feel for me is incredibly surreal. I can’t say for sure if Yee Naaldlooshii is actually a Duwamish tradition but the area and the tribe are so familiar to me it’s eerie, I realize that may not be the case for some but for me it adds just a little bit to the story and I have to say that I love it. 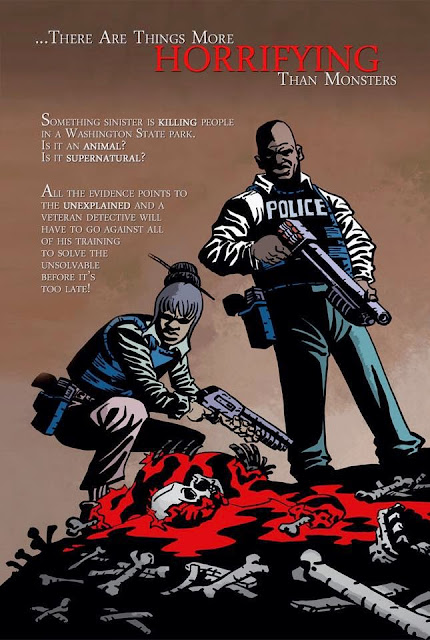 As the three of them go searching they find the fight their looking for and without spoiling the ending let’s just say that Detective Bevil really is good at his job. The ending is hard to explain without spoiling it because it’s a one shot versus an ongoing series but I can say that I enjoyed it and it left me with a smile on my face. As far as the writing is concerned I think the crime fighting and detective work was excellent but I think what impressed me the most is the lack of leaning supernatural elements. The creative team and Bender could have easily written in supernatural ware wolves, zombies, vampires, or any other creative crutch to support the story, but instead they made the supernatural element dependent on the story which is refreshing to me. Sometimes comics can get a little heavy on the crazy and supernatural stuff and forget that there should be a story to tell as well, but Snarl is the exact opposite of that. Snarl relies on story and dialog that paints a vivid picture and Bender makes the main characters likable as well as smart so the reader gets invested in not just the characters but the story as well, that is where the good noir style came in handy. For my money character development along with excellent story development is more than any reader can ask for. I’m here to tell you “yes” to Snarl and I can say for sure that I enjoyed the book. I only have one thing bad to say about it, it needs to be more than a one shot. I could read a monthly with Bevil and Sagun’s adventures but I guess the point is to cherish what you have and enjoy it while you can, so please, go out and enjoy this book!
Posted by Unknown at 9:29 PM